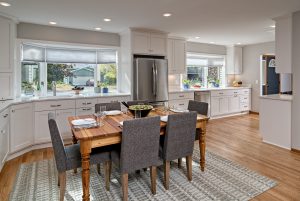 Anna hired Tomco Company on the advice of the designer her pastor had recommended. She and husband, Michael, had endured the previous homeowner’s poorly built addition and a 2004 remodel of their own by a big remodeling company that took 10 months vs. the promised 10 weeks. So, choosing Designer Carol Klein and Tomco Company  for their 2020 remodel was a true blessing. 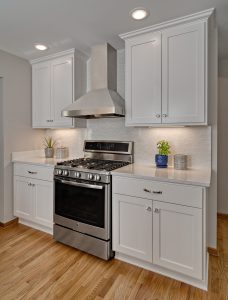 With her doctorate and experience running a research lab at the University, Anna is extraordinary at documenting things and communicating clearly. We asked an independent writer to interview her. Afterwards, he suggested the best way to help future Tomco clients was to simply publish the transcript and let her recount her Tomco experience in her own words.

Tomco likes to consider itself one’s contractor for life. Would you hire Tomco again based on your first experience?

Do you have any advice for other families contemplating remodeling in the coming year?

Although COVID may not be resolved as quickly as many hope, Tomco does a very good and safe job managing the work and living spaces to protect the homeowners, themselves, and their crews.  If they have the financial security to do it, families should feel comfortable moving ahead with remodeling

Why did you choose Tomco?

About 5 years ago my pastor mentioned working with an interior designer whom she loved, Carol Klein. When she had interviewed designers, some openly disparaged her desire to keep a particular piece of furniture in the mix.  Carol didn't judge and has served this pastor now for years.

I told Carol that we wanted ideas tailored to how we really live, help defining and decorating our living spaces, overall cohesion of decor (color, furniture, art ...) with low or easy maintenance and dog friendly fabrics/finishes. I had 3 pages of ideas and questions.  As she moved through our home she provided an amazingly comprehensive vision of how it could be reconfigured for function and marvelous ideas for furniture placement.  She addressed most of my list without my sharing it.  After she left, I immediately listed out all her suggestions so we wouldn't forget them.  It took 5 pages!

Carol noted that if we wanted to move forward with a major remodel, she would recommend Tomco Company (Tom Schiebout and Alan Hall).  I had started researching kitchen remodelers on Angie's List, Google, Houzz,  and Better Business Bureau and  was heartened that the Tomco website fulfilled my criteria (licensed, bonded, insured, before/after photos, well-expressed statements regarding philosophy, credentials and services).  The new website is even better!

I understand your earlier remodel did not go smoothly. How did that impact your choice of Tomco and how you worked with Tom?

Our dissatisfaction with the 2004 remodel was more about the process.  The big construction company’s 10-week estimate turned into 10 months. Their designer and estimator were great, but when it came to execution, the production team faltered. The owner of the company was out of the loop.

For this remodel, I knew I wanted to have a direct relationship with the person responsible for the bottom line.  There are different risks choosing a smaller family-run business. That's where Tom’s more than 40 years of experience was really important.  Seeing how Alan's skills are growing in the company over this short time provides a sense of relief that I can continue to turn to Tomco for our needs long into the future.

It was fun to watch the shorthand communication between Tom and Carol the first time we met with them. Tom's expertise and experience was very evident.  He's very comfortable to talk with, a salt of the earth type.  There were occasions when we didn't know what to ask.  Tom could sense that (Alan Hall as well) and was very patient about educating us about our options.  As we shared with him some of the other projects on our list he cautioned us about "scope creep."

Carol had also addressed design aspects for the spaces adjacent to or visible from the main area of the remodel.  Having that vision and guidance was priceless.  She had suggested updating or at least painting our main staircase railing.  Tom weighed in with his concerns that it wasn't built to code, which Michael had suspected.  We were glad to learn that Tom wouldn't, in good conscience, just do a cosmetic fix.  If he was to do more than just paint the existing system, he needed to "make it right."  Yes, I did compare Tom (in my head) with the TV contractor, Mike Holmes.

We met with Carol, Tom and Alan multiple times before signing the remodeling contract.  They were very patient and tolerant of our questions and of all my lists.  We talked business, but we also shared about our families and life in general.  We have similar values and outlooks on life.  And, we have decent senses of humor, particularly that we can laugh at ourselves.

Why did you trust Tom and Carol?

The trust developed in many small ways.  Tom, Alan & Carol were always respectful, they arrive on time or called if they were running late.  As a woman, I particularly appreciated that Tom and Alan were never condescending.

Carol was our gateway to Tomco and she steered us correctly. We were fortunate to have had a personal acquaintance recommend her, but Carol really earned our trust within minutes of entering our home.  She listened and truly cared about creating a beautiful space that really worked for us.

Carol was mindful of our budget but without compromising quality and function.  For instance, she recommended refinishing our hardwood floors rather than replacing them because it suited the design and the budget.  I am 5 feet, 2 inches tall and would not be able to reach the bay window blinds behind our two kitchen sinks. She suggested using a simple Grabber long-reach device rather than spending an extra thousand dollars on remote controls.  The tool also helps me reach the top shelves of the new kitchen cabinets. 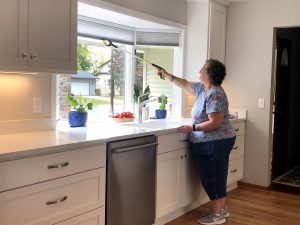 Tom had suggested a work area with a lower counter height for me.  Carol suggested that we repurpose our old dining table for use as a lower work surface in my baking area. We refinished it and have fallen in love with it again after 25 years.

As my pastor's experienced, Carol didn't look down her nose at us.  She respected us and we could trust her.  She knew I was detail oriented and that our contractor should have a commensurate level of fastidiousness.  Tom's manner may be laid back, casual and calm, but his work is on point.

You like to bake and Michael likes to cook meals. Carol designed a kitchen to serve both of your specialties. Now  each of you has your own space and sink. How has it worked out?

We love it!  Michael is truly in his element as a chef now.  We can both work and not get in each other's way.  The 2nd sink is a big deal and is used all day long.  I'm happy I pushed for it to be so large.

What else do you like about the new kitchen functionally and aesthetically?

Functionally, there is much more counter space and it is immediately usable space. We don't have to store stuff on the counters anymore because there is more cabinet and drawer space.  Even when there were 5 of us prepping and cooking a few weeks ago, we all had plenty of  room to work.  Michael loves the two sinks.  There are times he  uses both!  Also high on our lists are the vent range hood (venting outdoors), the soft-close cabinet doors/drawers and the breakfast station.

Aesthetically, Michael and I agree that the best thing is the brightness of the space.  That comes from the white cabinets, the very light grey walls, the light (white, grey, cream) counters, the walls that were opened up, the light blinds and the LED lighting fixtures (overhead and under-counter).  It makes me happy every morning when I come down the stairs because it's so bright and cheerful.

We also are pleased with how the kitchen and dining spaces relate with each other. The dining space is basically enveloped by the kitchen so everyone is engaged and included.  And, the space is more open to the rest of the great room so when we have a large gathering (someday ...) everyone can be connected to the action.

We didn’t like anything about the old kitchen.  It was too dark, too small, had disintegrating cabinets, and a re-circulating vent hood.  The worst problem was the tile countertops.   We could never get the grout safe and truly clean of bacteria.

How did the fireplace wall design come about? 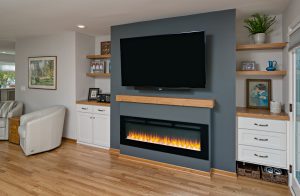 That design process was a hoot!  I had the rudimentary concept of adding an electric fireplace (a left-field idea from Carol to address that cold zone) with a simple mantel and the biggest possible TV above it (for Michael).  Although Carol had suggested lower cabinetry and open shelving above for the alcoves on either side of it, we hadn't talked about the specifics. We were all tiring out that day but were determined to finish the plan.  The main problem was dealing with the wood-burning fireplace chimney chase (for the upper and lower levels) which run behind that wall. Tom didn't know if the electric fireplace could be fully or partially set into the wall or if it would need to be mounted on the wall.  Michael and I stood back and watched the show.  Carol knew her design and Tom supplied what was feasible and the required measurements.  They were back and forth with their shorthand language, measurements and ratios.  It took awhile for us to realize that they were going to bump out the lower part of the wall to be able to set the fireplace in.  Tom and Carol also worked their number magic to determine the depth of the drawers for the right alcove.  It turned out beautiful.

You embarked on your project despite COVID as some families put their projects on hold. In hindsight, are you glad you moved forward? Did you feel safe?

Michael and I have each worked in allied medical fields and our eldest son is a chemical biologist so we had a reasonable understanding of the realities of the COVID pandemic.  We are also fortunate we're living in MN where the governmental mandates have been logical and relatively timely.  Tom described the protocols he and his subs would be using and Michael and I added how we could handle things.  We were fortunate with the configuration of our home and with it being spring, so we had 4 separate entrances with which we could work.  We were able to live on the upper and lower levels while most of the work was being done on the main level.  We did have to juggle around a bit when the "scope creep" projects came into play, but every person who came into our home followed the protocols.

Early on, Tom was coveting the boxes of non-latex gloves I had out because he was having trouble getting gloves and  N-95 masks for his people.

I told Tom he could use as many as he wanted.  Then I sewed up a bunch of cloth masks for him.

We're glad we went forward with the project.  It ended up taking a bit longer than if we hadn't been dealing with COVID due to limits to the number of subs working at a time and with some materials being delayed.  Michael and I had decided we could manage indefinitely with our makeshift kitchen and the outdoor grill.  Michael's job was secure so we weren't concerned about losing income, so we felt it was our little contribution to helping others be able to keep working.  The one drawback of doing the remodel during COVID was that we couldn't get out to sit, eat and relax at a restaurant. 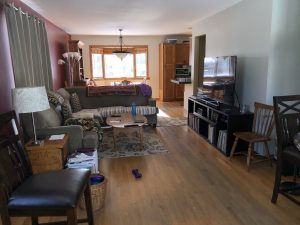 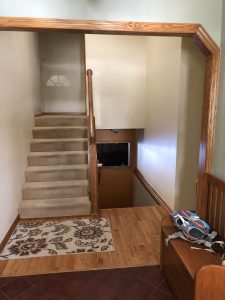 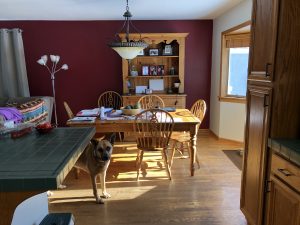 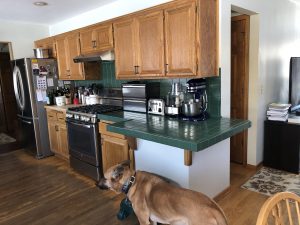