Luke and Sara first approached Tom Schiebout and Tomco Company through the Coon Rapids’ Homes for Generations program, which provides financial incentives to remodel homes that are more than 20 years old. What began as an ambitious whole house makeover dream initially has produced a new master bath, entry door and garage door. 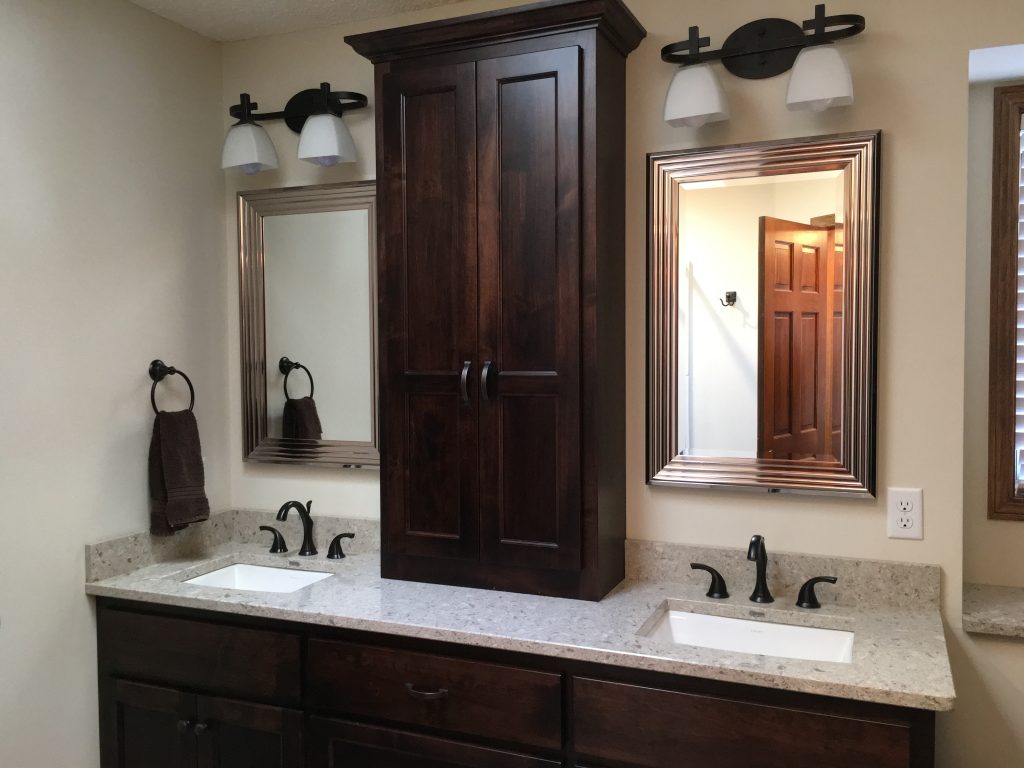 With three children under four, the young couple could not be more pleased to have a high-functioning master bath. “We wouldn’t change a thing,” Luke said.

Like many Tomco Company clients, they elected to eliminate their jetted tub in favor of a larger shower, dual-basin vanity and expanded storage. Their priorities were easy care and functionality rather than high-end finishes. They chose a one-piece fiberglass shower and luxury vinyl plank flooring in place of tile but splurged on granite with undermount sinks for the vanity.

The couple really appreciates the additional storage from the larger vanity, center cabinet and the tall cabinet opposite the toilet. They enjoy being able to store towels in the bathroom and to keep things like makeup and small appliances behind doors so the kids aren’t tempted to experiment.

Luke said they are grateful that Tom stuck with them as  they refocused from whole house to the few near-term goals. They were especially relieved when he rearranged his production schedule to complete the remodeling before their third child was born in December.

“In hindsight, if we had tried get all this done with a new baby, it would have been a lot more invasive,” Luke said.

The couple felt Tom’s 40 years in remodeling was a big asset as they considered layouts, materials and fixtures. “Tom came up with the new layout and the flow is so much better,” he said. “This is our first home, so we really appreciated his wisdom through the process.”

The couple now refers Tomco Company to family and friends and plan to use the Andover contractor for future interior or exterior projects.