When Tim and Amy Wysocki were ready for their third remodeling project since 2005 this year, they again contacted Tomco Company. The New Brighton couple was confident they could count on Tom Schiebout for quality work and a fair price. But this kitchen remodeling experience brought something extra. 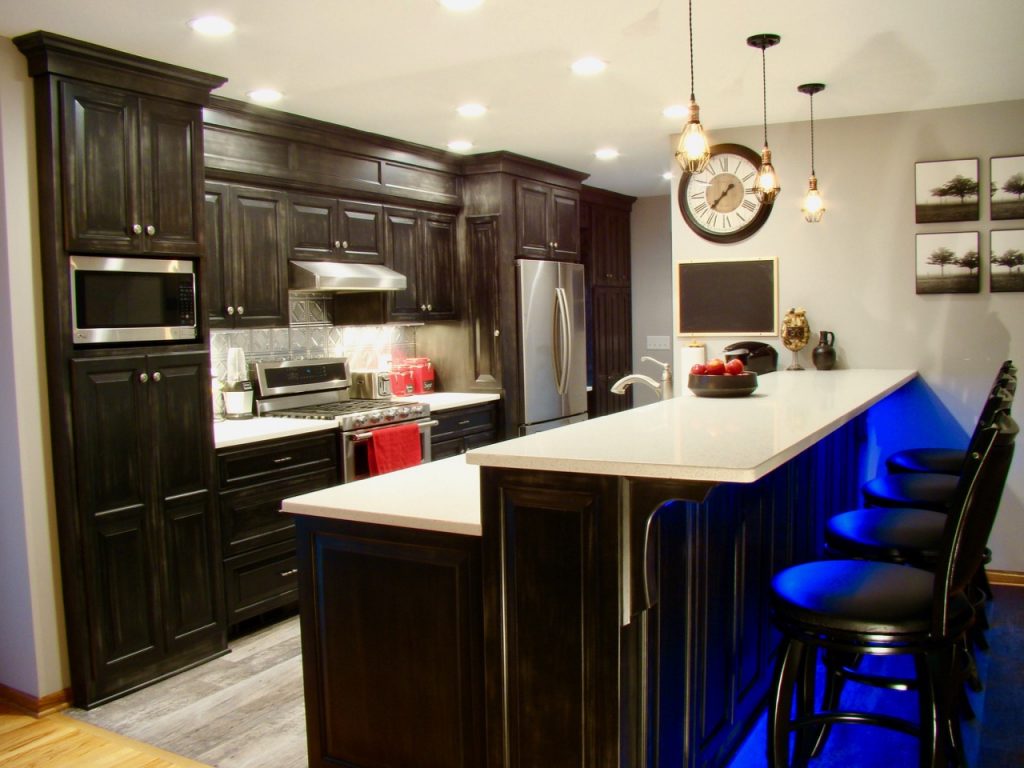 Tom had both designed and built their addition in 2005 and remodeled their master suite after that. He also had replaced all of their windows and most of their interior millwork. For this latest project, their friend who primarily designs commercial spaces had developed the remodeling plan as a gift. His concept was to remove two walls of the narrow galley kitchen and install a peninsula bar and ceiling height cabinets.

Instead of installing a post at the end of the long bar for a dropped beam to support the ceiling, Tom suggested placing the beam above the bottom chord of the attic trusses. That made possible a continuous, unbroken great room ceiling that spans the kitchen, dining area and living room. I can tell you from experience. You walk in the front entry and think, “Wow. This space is really big.”

It’s one thing to install a 22-foot-long engineered lumber beam when building a house with easy access for equipment. Getting one into place in an existing home is lot tougher. Yet it was just another day in the life of the resourceful Tomco crew. The solution? Cut a hole in the end gable of the attic and slide the 18-in.-tall  beam through the truss chords until the end rested on new bearing posts in the remaining walls. Then secure the bottom chords to the beam with special engineered hangers and install a broad patch in the ceiling drywall to help prevent future cracking.

Most people judge remodeling projects based on how they look and function. This hidden, over-the-top beam is a great example of why what you don’t see can be just as important. When I ask homeowners what they like least about their open floor plans they often point to an awkward post or dropped beam that breaks the view. Thanks to Tomco Company, these clients are spared.

After three major remodeling projects with Tomco Company, the Wysockis have some advice for fellow homeowners.