This Tomco project is a case study in smart remodeling and teamwork. The main level makeover demonstrates how to gain functional and attractive living space without adding on. It also shows how you can make a floor plan more open, within limits, for the best of both worlds. 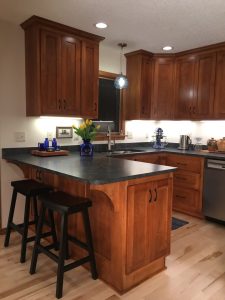 Martin and Linda had four objectives when they contacted Tomco Company last year on a subcontractor’s recommendation:

At first they planned to remodel the bath and kitchen in phases, but Tomco’s Tom Schiebout convinced them he could provide more value and achieve a better outcome by completing everything at the same time. After sharing the space with out of town family over the holidays, hosting a couple of parties, and experiencing two months of daily living in the new space, the empty nesters say they wouldn’t change a thing. (Except maybe living in the basement last fall during construction.)

The original 1970s kitchen peninsula had an overhead cabinet so it functioned more as a pass-through that separated the workspace from the eating area. Meanwhile, French doors divided the eating area from the family room addition. The new layout features an open peninsula with a pair of benches. The doors are gone too.

Now a floor to ceiling wall of cabinetry with accessible storage and a distinctive eye-level bookcase replaces the table. This  improves traffic flow and storage between the front hall and the family room. With the kitchen table removed, the couple now enjoys daily dinners in the dining room that had mostly been reserved for entertaining in the past.

“It has almost created an L-shaped great room. Between the kitchen and the family room is where people hang out so it is much more open to flow back and forth,” Linda explained.

The kitchen work zone is much more functional too. “Before you could only have one person in the kitchen. And everyone else would stand there and watch me,” Linda recalled. “The way it is designed now, you have multiple work stations so a lot of people can be helping out in the food prep,” Martin added.

In the old kitchen, the refrigerator had no nearby counter space. A counter with a pull-out cutting board now separates the new fridge and stove on the same wall. “It’s just so much more functional. There are drop spaces. I don’t have to set the milk on the stove when getting stuff in and out of the fridge,” Linda said.

The couple knew they wanted rich maple cabinetry with contrasting dark stone countertops and lighter flooring. They chose sand-in-place maple flooring with a clear Bona finish for the kitchen, dining room, halls and three bedrooms. This achieved their main-level integration and air quality objectives. Tomco also updated cabinet doors and drawer faces and hardware in the hall and hall bath to match the kitchen.

“We previously had high quality laminate flooring in the kitchen and the entry. It was from Norway, and they couldn’t get it here anymore. We kept coming back to what we really liked was solid hardwood flooring. We have a number of allergies also so we knew we would have to at least recarpet bedrooms if we changed anything. So we bit the bullet and went with what we loved and used maple flooring throughout,” Linda explained.

Linda and her designing daughter picked Jet Mist Honed Granite counters for a soapstone look without the chipping and scratching. “It’s about as close to a soapstone look as you can get without being soapstone,” Linda remarked.

Linda credits Tom with painstakingly creating a custom finish color match for the millwork and cabinetry, which saved them the expense of replacing the oak trim throughout the house.

“Tom worked very hard, it took a lot of hours, to get the stain just right so when you walk in the kitchen you focus on the maple cabinets. The trim still is oak, but you don’t really notice it because the cabinet color matches so well,” Linda said.

Tomco also updated the kitchen with extensive LED lighting. “It’s lighter. It’s brighter. I didn’t know that I really cared about undercabinet lighting and now I love it. I can actually see what I am doing and we can control it with dimmers,” Linda said.

“A number of people have said the kitchen is a very calming atmosphere with the colors of the wood and the counters and being able to adjust the lighting,” Martin added.

Putting the Master in Bath 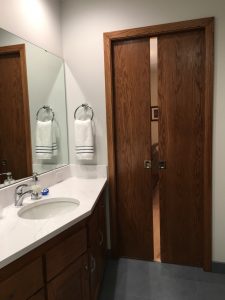 Linda recalls discovering the private bath off the master bedroom when they bought the house and thinking, “Oh look, a second bath!” But she knew the reaction would be more like “Really?” at resale because of its tiny size and narrow, 24-in. doorway.

“My mom had a knee replacement and getting her in there was a problem. The walker wouldn’t fit through the old doorway,” Linda recalled. Tomco annexed a bit of space from the adjacent family room to make way for a large, accessible shower and wider floor and door.

Tom eliminated the upper part of the partition between the vanity and the toilet to open up the space visually without compromising privacy. However, the biggest innovation is the split pocket door.

Without room in the wall for a 32-in. wide pocket door, Tom fitted the space with split pocket doors that slide to each side. The vanity and countertop taper toward each end to accommodate the undermount sink and the wider doorway and toilet access. 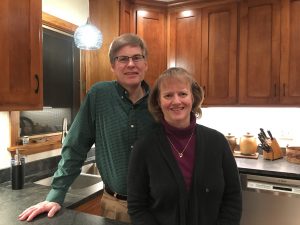 The couple said they are glad they chose a contractor who was more than a salesman. “We used to have a pantry closet in the kitchen. Tom said, you know, you could flip the door and access the space from the hallway and still have a pantry. That created a lot more useable space in the kitchen. As a carpenter he could visualize things where we had no idea,” Linda explained. “Tom did a phenomenal job and all of his subcontractors were great. This is the kitchen I wanted to see when I was searching for ideas!”